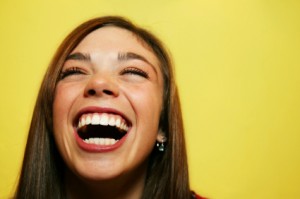 Laughter is medicine for the soul. Have you ever noticed how infectious laughter is? It’s more contagious than a cough, or even a sneeze. It binds people together and increases happiness and intimacy. Further, laughter can strengthen your immune system, boost your energy, diminish pain from your body, and it may even help you shed a few pounds. Don’t think this is possible? Well it is believed that laughing helps burn calories by increasing your heart rate by 10 to 20 percent. Also, a mere 10 to 15 minutes of laughter could increase your energy expenditure by 10 to 40 calories per day, which could translate into about four pounds a year. Best of all, this amazing medicine called laughter is free and easy to use.

We sometimes think of laughter and humor as being one and the same. However, it is important to note, laughter and humor are not the same. Laughter is believed to be the physiological respo­nse to humor, and it consists of two parts — a set of gestures and the production of a sound. During laughter, the brain forces us to conduct both activities simultaneously. William Fry, associate professor emeritus of clinical psychiatry at Stanford University believes that “a belly laugh is internal jogging.”

When I need a good laugh I do one or two of the following:

If none of the above suggestions resonate with you it’s okay, there are other options. For instance, there are thousands of laugh clubs worldwide which invite people to laugh out loud together, one such organization is Laughter Yoga International. At the Laughter Yogo gatherings participants are encouraged to introduce themselves and then laugh. Further, there is also a hybrid branch of psychology called “laughter therapy” which is now showing up in hospitals. And finally, Laughtercising, a new exercise movement, has created guidebooks and laugh-track CDs of nonstop laughter. It’s important to note, laughter alone won’t help you shed those unwanted pounds, but it can definitely shift your mood and your desire to overeat. That said, the next time you feel the urge to feed your emotions, try taking a laugh break instead and see what happens.

Question: What do you do for a laugh?

Here’s to your health!

About the Author: Freda Nunn

Freda is the owner and Senior Instructor of Esenyl’s Pilates, LLC. Many people are curious about how she became interested in Pilates and wellness. The truth is, she was like many of you today. She struggled with finding balance in her life and in her body. The end result was weight gain, low energy and a health challenge that caused her to experience great pain within her body. She knew there had to be a solution to her problem and indeed she found it in a Pilates class. Finishing the class, she knew that Pilates was what she wanted to do and share with others for the rest of her life!